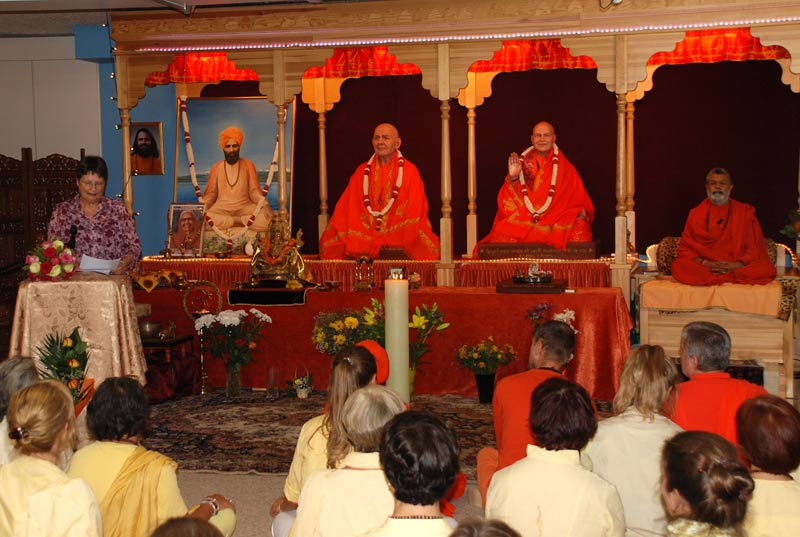 Messages of peace and non-violence from 2014 Peace Forum

Vienna, October 2, 2014 – At the occasion of International Day of Non-violence and anniversary of Sri Mahatma Gandhi's Birthday the Sri Swami Madhavanda World Peace Council and its founder His Holiness Abunau Vishwaguru Mahamandeleshwar Paramhans Sri Swami Maheswarananda, SwamiJi invited distinguished international guests to a Peace Forum to share their thoughts on how to attain peace, tolerance and love in today’s increasingly troublesome world. With more than 250 participants in Yoga in Daily Life Centre in Vienna and thousands of viewers following the celebration through Swamiji.tv live web-cast the message of non-violence radiated across borders and continents.

After the initial peace prayer and mantras, the ceremonial flame of peace was lit by His Holiness Abunau Vishwaguru Mahamandeleshwar Paramhans Sri Swami Maheswarananda, Mr Gregor Kos, Secretary General at the Ministry of Education Science and Sport of the Republic of Slovenia and Dr Manfred Stepponat, President of the International Sri Deep Madhavananda Ashram Fellowship.

Some pearls of wisdom from the Peace Forum:

“Compassion and understanding is the only path to peace.”

Monsignor David Cappo, Catholic Church, Australia, Vice-president of Sri Swami Madhavanda World Peace Council: It is time for the people of good will and the universal God to unite in prayers against the violence and terrorists who are undermining the world stability. As individuals we must stand together and play out an important role with the lives we leave, to open our hearts to people of different race, religion, ethnic origin, culture and social status. SwamiJi is the embodiment of this way of life.

“Stop the violence against the Mother Earth”

Radha Dr. Renate Lavicka, General Secretary of the World Peace Council, Austria: Shocking data was published a few days ago by WWF, namely, the number of wild animals on Earth has halved in the last 40 years mainly driven by human consumption. Yearly we use about 50% more natural resources than the planet can regenerate in this same year. This means that in 2030 we would need two planets to continue to exist, moreover, if everyone would live like Kuwaitis or Austrians, we would need 6 or 3,5 planets respectively.

“Congratulations to India on the birth of two great sons”

“Peace is a state of being”

Swami Premanand, Austria: Mahatma Gandhi realised his inner being and transformed it into the outer world. His endless efforts are reflected in his words: “There is no way to peace, peace is the way”. Similarly GuruJi’s message, that peace is a state of being, inspired so many people in India and all over the world. “Peace and bliss come from Satsang”, he said. There is no peace without Satsang and no happiness without peace. Indians say that 7 saints can sleep under one blanket and no blanket is big enough for a king. The intellect enables humans to distinguish, to take decisions; therefore it is important to be in peace with ourselves and with the outer world. Peace is only one part of the Truth – what we are in our inner self.

Muktamani, Claudia Matejovsky, Managing Director of Ayurveda Academy of Yoga in Daily Life, Austria: 1. Ahar means nourishment. Decision for vegetarian diet contributes to peace. 2. Vihar means to know where to go and when. We should seek company of good people, attend Satsangs and work for others. “The best way to find yourself is to lose yourself in the service to others.” 3. Achar are life rules, like good manners and ethical conduct. “We are one; I cannot hurt you without hurting myself.” Vichar stands for thinking and inner dialog. “We are what we think.” “In search for God, if you don’t find Him in the next person that you meet, it makes no sense to seek further.” “No-one can hurt me without my permission.”

“Animal rights: Save the birds”

Sugand Puri, Gregor Kos, Secretary General at the Ministry of Education Science and Sport of the Republic of Slovenia: Non violence means not only respecting the human rights. Animals too have rights. It is unacceptable to shoot animals and call it a sport. In the same way as it is unacceptable to kill animals for eating. It is against animals’ rights. Pesticides are also killing birds. Question remains whether we really need this kind of unhealthy agriculture? Simple answer is: No! This makes the “Save the birds foundation”, initiative of Sri Swami MaheshwaranandaJi, which he inaugurated on August 15, the date of his birthday and the birthday of the Republic of India, of highest importance. It is yet another gift of his not only to humanity but in broader sense to the World. Again he has proven how his divine vision can react immediately when problems or tensions arise, on contrary to far too many international organisations, which can only address problems or issues after certain amount of precious time has already passed.

“Message from those who cannot speak”

Jasmin Devi, Austria: Ahimsa is universal, it unites all religions, it is not bound to a country, not even to a planet. Through thoughts, words and deeds we can bring it to life. We influence the world with what we do. As GandhiJi said, Mother Earth has enough for our needs, but not for our greed. The humans as the most intelligent beings on the planet are obliged to take the responsibility for those that are weaker. Statistics says that 56 billion animals are slaughtered every year, more than 6.000 thousand animals are killed in the time we take one single breath. Greenhouse gas emissions from livestock animals are higher than those emitted by every car, plane, ship or car on the planet. People say that it is natural that stronger kill the weaker. But we are not animals, we are humans. We have the empowerment to live Ahimsa, forgiveness and compassion. If we don’t live humanity, what does this make us? We are powerful; we can start making right decisions today.

“Satya Graha - the search for the truth”

Jay Prakash, Joshi Warzel, long-time SwamiJi’s disciple, Austria: There is so much meaningless suffering in the world and GandhiJi was fighting against such adversity. Through his Satya Graha movement he showed the people what they can achieve through the power of truth and will. Every person can follow this wisdom and use it in his or her own life.

“Be the change you want to see”

Krishnanand, Kovács Károly, President of Hungarian Yoga in Daily Life Association, Hungary: Mahatma GandhiJi said: “Be the change you want to see”. What do we all really want – peace, happiness, love and harmony. “Tons of theory are nothing compared to a gram of practice”, therefore peace is something we should practice 24 hours a day on the spot where we are. We have to live in peace with our family, friends, neighbours, co-workers, but also with people that are not so friendly to us. Love and compassion will help us accept people that may think differently. Peace is acceptance, the cultivation of capability to accept other people’s wishes. As Sri MadhavanandaJi said: “One in all and all in One”. When we realise peace and love in ourselves, it radiates to everybody around us. SwamiJi gave us Yoga in Daily Life to create harmony of body, mind and soul, but we should not forget the social harmony and love. When we come close to SwamiJi, we feel the kind of love and peace that we would like to attain.

“Peace is in you”

Dr Naresh Sheetal, Eye-doctor, India: GandhiJi said: “You can win the world with love or hate”. He used the way of love and that is the best way also for us. Love is God. He also said that an eye for an eye will only make the world blind. The great emperor Ashoka was the best warrior, best killer, we could say, but he realised that if he kills everyone, he reigns alone. And what then, for whom has he won the world? Therefore he turned to peace. Nothing is outside, peace, love, non-violence, they are in you. Whatever you do, your consciousness will tell you if it is good or not and if you should do something or not.

Shri Alok Raj, Counsellor at the Indian Embassya in Vienna, as representative of H. E. Rajiva Misra, Embassador of India to Austria conveyed greetings and appreciation of His Excellency. He concluded: Ghandiji’s thoughts about Ahimsa inspire people, we all know his message and it is our task now to put it into practice.

“Ahimsa is the highest principle”

His Holiness Abunau Vishwaguru Mahamandeleshwar Paramhans Sri Swami Maheswarananda, the founder of the Scientific System Yoga in Daily Life, India: Millions of people have been adoring, remembering and following the footpath of GandhiJi. Unfortunately over the last decades even in India GandhiJi’s teachings have begun to disappear. Thanks to United Nations the message of GandhiJi is heard again. At the same time, he is the father of the Indian nation and its son. Many great philosophers gave their golden teachings to the people, but their greed stemming from ignorance is too big. The Sri Madhavananda Peace Council is striving for peace for years through organisation of peace conferences and forums all over the world. Thousands of NGOs are working in the world for peace, protection of the Mother Earth and all living beings. As it was said, we just have to make one step, we just have to take a decision not to eat meat. We have enough food. The feeling of pain, when you see your family members being slaughtered is the same in humans and animals. The pain which we are inflicting on these creatures is unbearable.

The notions of Punya and Papa are known from Vedic philosophy. Punya are good deeds that will give us good luck, good destiny and life. It is Dharma. Papa is sin, the sin that will bring us revenge, which will be 100 times stronger. Papa leads the soul to suffering and revenge and Punya leads the soul toward liberation.

Holy Guruji used to say, the essence from all 4 Vedas and 6 philosophies of India is that the one working for the wellbeing of others, will prosper and the one who is torturing others, will also be tortured. The root of Dharma is mercy and the root of mercy is Ahimsa. Karma will come back to us sooner or later. The acts of Punya are the acts of Ahimsa. Humans have intellect, but the intellect needs good education. Animals are innocent, they cannot speak for themselves. Humans have to protect them. With killing of animals and polluting the world we are following the path of destruction. Non-violence means to be merciful to this Earth.

“Ahimsa is the highest principle”. All scriptures begin with mantra of peace – Shanti. But where is peace, as GandhiJi said, there is no way to peace, peace is the way. The Atma, our true inner self, cannot be killed, but before you killed me, you killed yourself. We see today how weapons are being produced and sold to the same people that the army if fighting against. In the same way the pesticides we are using today will kill our children in the future. When someone is killed, it is not the enemy who dies, it is the human, when an animal is killed, it is a living being that parishes. Who cannot give life, should also not take it away. The animal will eat the animal, life will eat life, but human, you are the protector.

The message of today is that if we cannot do good, at least we should not harm. Don’t eat meat.

Oh God, please disregard my mistakes and allow me to come into the light.

This unique celebration of the United Nations Non-violence Day concluded with a dedicated prayer and overall acknowledgement of the event’s importance and the necessity to continue in efforts for peace. 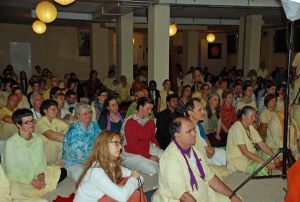 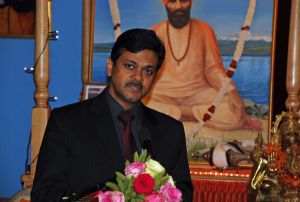